Whose Canada150?: Listening beyond Colonial Narratives

What is Canada150? What are Canadians celebrating and why? Who is included and who is excluded from Canada150?

When Dr. Dawn Martin-Hill spoke on March 23 as part of the Wilson Institute’s Canada150 speaker series, she remarked that 150 years of Canada should be uncomfortable. Celebrating 150 years of colonialism should be an awkward celebration. As the many speakers in the Wilson Institute’s series have shown us, the events and people involved in the past 150 years of colonialism in northern North America are not always deserving of celebration. As historians, we have spent the year examining the complexities of not only the event of Confederation, but also the ways we choose to think about and commemorate the processes and peoples involved in 150 years of Canadian colonialism.

A century and a half of Canadian colonialism includes multitudinous perspectives, voices, and experiences and, as historians, we should listen to these stories and work to create a fuller understanding of how these 150 years have shaped us as people. We should invite such stories into our work and share them with our communities within and beyond the academy.

When Dr. Martin-Hill spoke in March, she encouraged us to engage with Indigenous views of Canada150 celebrations and provided some excellent starting points for settlers unfamiliar with the work being done to challenge colonial narratives that do not reflect Indigenous experiences.

Christi Belcourt’s beautiful, heart-breaking, and inspiring poem “Canada, I Can Cite for You, 150” is one example in the larger movement called Resistance150 and shared with the social media hashtag #Resistance150.

In her presentation, Dr. Martin-Hill referenced the work of scholar Linda Tuhiwai Smith, Decolonizing Methodologies, in which Smith calls on scholars of colonial history to respectfully include Indigenous peoples whose families populate those histories. Respecting Indigenous people means understanding and recognizing their humanity – a vital part of creating histories of colonized places because, as Martin-Hill argued, dehumanization is tool to justify genocide. Dr. Tim Stanley, the speaker who followed Dr. Martin-Hill in the series, told us that “ghosts surround us.” He argued for the interconnectedness of everything, the “common construction of all humanity,” and he encouraged attendees to recognize that “our world is a historical product” with “uneven distribution of goods” and that the exclusion of languages and meanings in our interpretations as historians and Canadians has consequences.

Kent Monkman’s painting The Scream was a central element in Dr. Martin-Hill’s talk because, as she said, it “puts the lie in our faces.” In Monkman’s interview with the Toronto Star, which asked what the last 150 years mean to Indigenous people, Monkman included in his response Indigenous sexuality and gender as a form of resistance, a sentiment echoed by Dr. Martin-Hill. Among the many elements of Indigenous experience included in Monkman’s recent work is both a thread of the abject cruelty of Canadian colonialism and the multifaceted resilience of Indigenous peoples who continue to bear the brunt of it.

The resilience of Indigenous youth in the face of 150 years of Canadian colonialism, including what Dr. Martin-Hill called ongoing environmental racism, is an experience of which historians may do well to take note. From the Home to Me rap created and performed by youth from Grassy Narrows to resistance against the Dakota Access pipeline, supported by Indigenous youth across Canada and evident in the video Black Snake performed by A Tribe Called Red and Prolific the Rapper, young Indigenous people are creating powerful counternarratives to the celebratory Canada150 narratives that do not reflect Indigenous realities.

Following Dr. Martin-Hill’s talk, a student asked her, “what can allies do?.” Show up, we were told. Ask questions; listen; use our privilege, access, and resources to amplify (NOT REPLACE) Indigenous voices and perspectives; make space and invite Indigenous people to share their experiences of 150 years of Canada. One week after Dr. Martin-Hill, Dr. Stanley stressed the importance of looking each other in the eye. Racism, he said, is rooted in the fear that those they have othered will do to racists what racists are doing to those they have othered. Echoing Dr. Martin-Hill, he urged historians to come out to support Indigenous peoples, look each other in the eye, and leverage our privilege in anti-racist ways.

In support of the work Dr. Martin-Hill and Dr. Stanley encourage historians to undertake 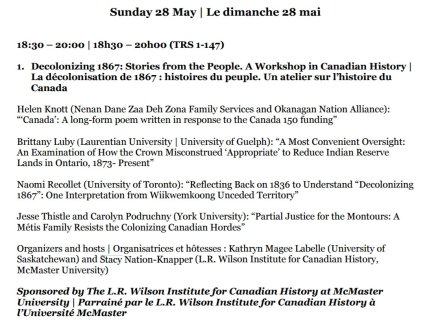 to reflect critically on Canada150, the Wilson Institute is hosting Decolonizing 1867: Stories from the People. We invite you to join us Sunday, May 28, from 6:30 – 8:00 pm, in room TRSM 1-147 at Ryerson University in Toronto to highlight innovative work examining 1867 from perspectives that explore a holistic historical approach to events in the territory that became Canada. We are honoured to host the following participants for this event:

Decolonizing 1867 is a restructured Wilson Workshop, reoriented outward to engage with publics beyond the academy, leveraging our access and privilege to support scholars and knowledge creators with perspectives on Canada150 that challenge colonial narratives. In addition to this blog post, an introductory post appeared with ActiveHistory.ca to familiarize attendees and those interested in the event with the content. We have partnered with Ryan McMahon, who will podcast Decolonizing 1867 at the Indian and Cowboy podcast. In June, a second ActiveHistory.ca post will be published, providing an opportunity to assess the event and keep the conversation going. Participants in Decolonizing 1867 will contribute, with others, to an edited collection with the L.R. Wilson Rethinking Canada in the World series through the McGill-Queen’s University Press.

Please join us. Decolonizing 1867 is open to the public, and all are welcome.

Stacy Knapper-Nation is a postdoctoral fellow at the Wilson Institute for Canadian History. The author of the thesis “N-Ikwkw-min: Remembering the Fur Trade in the Colombia River Plateau,” she is among the most esteemed young scholars investigating the relationships of Indigenous and non-Indigenous peoples in western North America. She is currently the Chair of the Editorial Committee for Findings/Trouvailles, the blog of The Champlain Society

3 thoughts on “Whose Canada150?: Listening beyond Colonial Narratives”