Beyond Borders will publish a series of articles related to and in anticipation of “Who Pays
for Canada? Taxes and Fairness,” a conference on taxes and fairness organized by Dr. Elsbeth Heaman that will take place at the McGill Institute for the Study of Canada from February 21-23. Today, we have our second of three.

crackdown on income tax evaders. It was a tax on sugar. At 2 cents a pound, the levy added over 40 per cent to the wholesale price. Parliamentarians and the press rose to protest this “terrific burden” on a necessary food, “used daily by the poor people of this country.” From the Liberal opposition benches, one MP called it a tax for times of “extremity.” If such times had arrived, then the right step was to tax income above a certain “ample” amount at 100 per cent.[1] That fiery defender of the poor and despoiler of the rich was J.L. Ilsley, revenue minister after 1935 and finance minister during the Second World War. To him and many others, the sugar tax was an outrage.

Today, sugar taxes are again prompting over-wrought rhetoric. Although public health researchers convince me that a well-designed tax on sugar makes sense, sugar tax twitter (#sugartax) is a polarized place. Anti-sugar rhetoric can be cartoonishly alarmist. But the pop-nutrition folk are a calm crowd, compared with People Against Sugar Tax, who are convinced that our very freedom is under threat from the nanny state. Or at least, that the well-being of an industry is at stake.

“Big Sugar’s” special pleading aside, the history of sugar is, in fact, slightly about freedom: it’s about needs and desires, about what we must have and what we may choose or relinquish. Sugar’s uses make it a bit of both. As a preservative, sugar usefully brings summer fruit into our winter diets. In wartime, it has been the soldier’s ally and fuel for the flagging war industry worker. Before the 1950s, candy was seen as an acceptable source of food energy.

But today’s many sedentary workers don’t treasure sugar’s fuel value so much. Added

sugars have become a pervasive tool of industries that trade in sugar’s capacity to prompt compulsive eating. As a condiment, it goes straight to our neural pleasure centres. (I’m thinking of a certain brand of golden corn syrup now, and feeling a bit dizzy just at the thought.) We’re rather scared of its power. Except on Valentine’s Day (and other such festivals), gifts of candy may not be gladly received.

Sugar’s place on the boundary of need and luxury has long made governments like to tax it. Along with taxes on booze, tobacco, and lottery tickets, sugar taxes are what finance ministers have called (not exactly jokingly) “voluntary.”[2] We’re all free not to buy such things, so the choice to buy is a choice to fill the public treasury. But they’re so close to being necessary that they produce a reliable revenue.

As the outraged pundits and politicians of 1933 noted, however, the distinction between luxury and necessity is contested when it comes to tax. Taxpayers as consumers have risen against all sorts of excise tax hikes, in defense of the workman’s pint or pipe, the teenager’s soft drink, and the child’s chocolate bar. They depict inventively the crucial purposes so cruelly impaired by a too-high sugar tax. In 1946, the 7 cent soft drink, tolerable as a war measure, was apparently driving teenagers into the streets, where they were roaming as gangs, rather than consorting convivially at recreation centres over a lovely, less-taxed, 5 cent beverage. The mayor of Newcastle, NB, pointed out that beer only cost a few cents more and had the advantage of being “intoxicating.” Surely this was a temptation to be prevented. The Rotary Club president in Summerside, PEI, thought that teens would be satisfied with a 5 cent pop, “sold at the soda fountains, corner drug stores, and restaurants” where they would be “always under the constant eye of the shopping public.”

These examples are from a letter-writing campaign that filled Prime Minister King’s mailbox in 1946.[3] Delightfully creative in their details, they nonetheless all present the 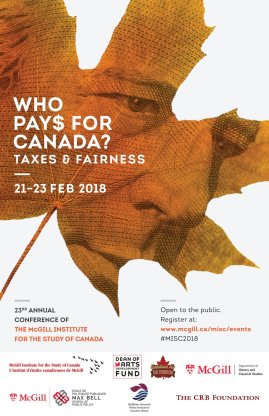 same arguments. With one exception. Among the voices from recreation directors, service clubs, civic officials, and apparently random citizens, there are also letters from “the carbonated beverage trade.” These made the case that faltering demand was threatening cuts in the payroll of local bottling plants, the mainstay of many a small town’s workforce. The authors of those letters had less to say about the dangers of misspent youthful leisure. But they were in no doubt that cheap soft drinks were a social good. PeopleAgainstSugarTax.com (PAST?) are their descendants.

The only item in the traditional toolkit of arguments against an excise tax that’s missing from the PAST campaign is that the tax will motivate illegal activities. Somewhere on the web, though, I’m sure that some opponent of the sugar tax is warning of the dangers of black-market gumdrops.

Shirley Tillotson is the author of Give and Take: The Citizen-Taxpayer and the Rise of Canadian Democracy. She is an Inglis Professor at the University of King’s college, and an adjunct professor (retired) at the Dalhousie Department of History.