2018 marks the fortieth anniversary of Edward Said’s opus, Orientalism—an event that merits collective reflection. As a means of joining growing transnational conversations amongst scholars, practitioners, policymakers, and activists that think critically about decolonization in the twenty-first century, McMaster University’s Wilson Institute for Canadian History will be hosting this week an international workshop on the theme of post-Orientalism, from Thursday September 20thto Saturday September 22nd.

According to literary scholar Hamid Dabashi, post-Orientalism “is not a mere critique of colonial representations;” rather, it re-presents “the manners and modes of fighting back and resisting [imperial culture]” and the structures it constructs.[1] By gathering emerging and established scholars from Canada and abroad, An International Workshop 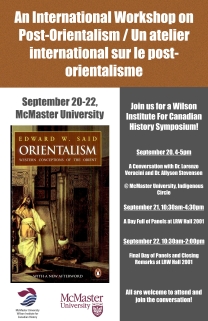 on Post-Orientalism / Un atelier international sur le post-orientalisme is meant to push forward the broadly defined framework of (re)conciliation within the field of decolonization.[2] Most importantly, it will do so in a relational manner attentive to differences among diverse peoples within and between various countries of the world, and the ways in which these differences carry over into current decolonial initiatives.

As a decolonial concept and approach, post-Orientalism remains under-theorized and -applied in historical and interdisciplinary scholarship.[3] Scholars have exhaustively tested Orientalism and identified its limitations, but failed to deeply engage with the transformative migrations that followed its publication in 1978. That is, they have traveled with Orientalism in hand, but not post-Orientalism in mind and heart. Edward Said himself identified this global phenomena. When reflecting upon the transnational conversations engendered by Orientalism, he determined that “there is still a remarkable unwillingness to discuss the problems of Orientalism in the political or ethical or even epistemological contexts proper to it.”[4]

Above all, Edward Said’s Orientalism empowered a “decentered consciousness” that critiqued international relations and its leading societies, unsettling the Western world on individual and collective levels.[5] By revealing the prevalence and power of imperial ways of seeing and being, Orientalism fuelled an emerging politico-cultural wave of decolonization in the world, first as resistance to imperial power and the demand for justice, but then as a call for universal equality in human relations built on a new terrain known as “reconciliation.” Recognizing that imperial cultures transcended a new liberal international system that on paper simultaneously supported the so-called end of empire and the creation of postcolonial nation-states, disparate intellectuals and activists turned to Orientalism when “decolonizing the mind.”[6] On a transnational plane, (re)conciliation thus “has as its object colonial discourse.”[7] It represents decolonial processes and praxes of harmonisations between different peoples and nations whose relations are structured by imperial mentalitésand their legacies. By identifying (re)conciliation as the core form of decolonization historically embedded in Edward Said’s Orientalism, An International Workshop on Post-Orientalism / Un atelier international sur le post-orientalismeaims to create an inclusive space to conceptually refine post-Orientalism and historicize its travels in Canada and abroad.

In the Canadian context, post-Orientalism can be useful in thinking about responses to the 2015 Truth and Reconciliation Commission report and its calls to action, fostering a deeper societal commitment to the lifelong process of (re)conciliation. As such, a post-Orientalist approach contributes to scholarly understanding by illuminating the ongoing efforts to redress Settler Canadian mindsets and the healing of Indigenous peoples across Canada. Indigenous and Settler scholars alike are increasingly and rightly scrutinizing the legacy of Canadian imperialism and confronting its dehumanizing stereotypes and clichés.[8] The workshop both engages with, and contributes to, the literatures on imperialism in Canada and Canada’s involvement in global imperial systems. In the process, it hopes to further connect the study of decolonization in Canada with those of the broader world by not only contrasting disparate decolonial experiences, unearthing linkages and divergences, but also by comparing the types of anti-imperial activisms that occurred within the country’s borders with those happening elsewhere. Ultimately, the workshop seeks to find valuable ways to examine decolonization in Canada by purposefully going beyond a nationalist framework.

For some time, Orientalism’s particular place within scholarship on Canada has been scant. A workshop on post-Orientalism, held at the leading institute of Canadian history in the world, reorients this relationship and does so by explicitly decentering “Canada” within the field of “Canadian history”, thereby opening up new points of access and possibilities for Indigenous and Settler scholars to engage with historical narratives and the ongoing work of (re)conciliation. In sync with the L.R. Wilson Institute’s mandate to better comprehend how Canada has influenced—and been influenced by—transnational phenomena, it indeed links non-Canadian histories of decolonization with those of Canada.

Outside the emerging academic field of decolonization history/studies, it has become common parlance to “decolonize” topics, places, and things, such as Manitoba, hospitals, and curriculums. In many Canadian cases, the use of decolonization metaphors has had the counter-productive effect of abating “settler feelings of guilt or responsibility without giving up land or power or privilege, without having to change much at all.”[9] In other

words, such decolonization metaphors have not been matched by the structural consolidation of reconciliatory practices. An International Workshop on Post-Orientalism / Un atelier international sur le post-orientalisme strives to create a public space to more deeply engage with big-picture methodological and epistemological questions that scaffold decolonial praxis in contemporary scholarship.

The workshop is open to the public. All sessions are being held at L.R. Wilson Hall, room 2001, with the exception of Thursday’s keynote, which will be held at the Indigenous Circle. Here is the final program.

This keynote event will be held at the Indigenous Circle (between the Faculty Club and Whidden Hall). In the event of rain, it will move to the Indigenous Ceremonial Room, L.R. Wilson Hall, room 1003.

10:00 AM: Opening Remarks and Registration

1:00 PM: Panel 5: Traveling Orientalisms and Decolonial Consciousnesses in the World