I recently gave a talk on Niagara Falls at McMaster’s Wilson Institute for Canadian History where I focused on the period following the Canadian-American 1950 Niagara River Diversion Treaty. Titled “Faking Niagara Falls: The Transborder Remaking of an Iconic Waterscape” my presentation drew on the book I’m close to completing (well, hopefully – I’m waiting on the peer reviews!) that looks at the modern history of this binational landmark. Of course, given Hamilton’s proximity to my research subject, I also took the opportunity to visit Niagara Falls – which I’ve done so many times I’m starting to lose track of the trips.

But I do know that my first experience at Niagara Falls was in 1996, the summer before my last year of high school. It was on the return leg of a long road trip from Saskatchewan to eastern Ontario to visit relatives. I don’t remember much of the day we spent at Niagara, aside of a few foggy snippets – and a general sense of awe (despite what my appearance in the photo below might suggest).

A decade after that family trip, I was conducting archival research for my doctoral dissertation on the St. Lawrence Seaway and Power Project. At first, I was including Niagara Falls in the Seaway story because they were so politically intertwined. But it quickly became apparent that Niagara deserved its own separate study (there could be a separate post here about research serendipity, but I’ll save that for another day). I began taking frequent trips to Niagara Falls, sometimes to do research, sometimes with my partner, Jen,  just to get the lay of the land.

By this time our first child, Elizabeth, was born (the same year I defended the aforementioned dissertation, and in the middle of teaching my first class!), and another child, Lucas, followed two years later. As I took on postdocs and other academic positions, our growing family made enough visits that the railing along the Niagara gorge served as the equivalent of those growth charts parents mark up on a kitchen door jamb: in each successive set of photos with the waterfall as the background, our kids were a little bigger.

Sometimes we stayed in tower hotels overlooking the Falls, other times we rented a house in residential areas, and sometimes we just stopped in for the day (much of this was made possible by research grants and funding, as well as Jen’s grandmother providing a home base just north of the GTA). I frequented both sides of the famed cataract, the Province of Ontario and the State of New York. While doing archival research at local libraries and institutions, I did my best to immerse myself in Niagara, both from the perspective of a tourist and as a local. I contacted and chatted up local historians and academics.

I hiked all around the gorge and river, and took a jetboat up the rapids and a helicopter over it all; we did the stereotypical tourist things more than once, like the Spanish Aerocar over the Niagara Whirlpool, the Behind the Falls and the Cave of the Winds experiences, the Maid of the Mist boat (now the Hornblower on the Canadian side), and so on. Our kids were more excited about trips with the grandparents to the over-priced kitsch on Clifton Hill, but they were still game for seeing the waterfall up close, again and again. There are certainly worse places to drag one’s family on research trips.

People assume that what they see when they go to Niagara today is pretty much the same as what someone saw 50 years or 100 years ago (aside of all the towers and casinos surrounding the waterfalls in the abutting cities). But Niagara Falls – the actual waterfall itself – has been moved and changed. This was one of the central points of my talk. Aside of the fact that natural erosion had already pushed Niagara Falls some 7.5 miles from its initial plunge point, this iconic waterfall does not look the same now as it looked even a half-century ago.

As my research uncovered, the waterfall has been so heavily manipulated that it could be considered fake. The Horseshoe Falls was remade in the 1950s, featuring elaborate and fascinating hydraulic models, and in 1969 the smaller American Falls were dewatered. Less than half the water of the Niagara River actually goes over the waterfall (depending on the time of the day and season). This was all done to convey, to use the engineers’ phrase, an impression of volume, rather than the actual volume. Over the course of the twentieth century, these modifications have turned Niagara Falls into simulacrum of its former self, an envirotechnical infrastructure that blends the natural and the artificial. 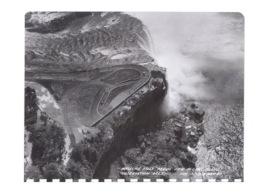 Work on reclaiming Terrapin Point in the 1950s. Photo courtesy of the International Joint Commission

The fact that Niagara Falls is something which people can go see for themselves makes it unique for historical study. In most of the settings where I’ve presented on my Niagara research, often more than half the audience has been to the Falls, and everyone has seen an image of it. The accessibility of Niagara Falls works to my advantage in several ways.

First, people are often genuinely surprised when they hear what has transpired at Niagara, particularly since so many have seen Niagara Falls for themselves. Thus, they feel “fooled” –  which is exactly what past planners and technocrats hoped. They wanted to get both beauty and power while halting erosion. Of course, they didn’t want you to feel fooled, but did they want you to feel like you were looking at a repository of the sublime.

Second, I can go look at Niagara myself again and again. I can investigate how historical processes are inscribed in the waterscape. In the historian’s quest for objectivity, or at least the appearance of it, we all too often write ourselves out of the picture. But physically immersing ourselves in our subject can be very beneficial (not to mention that using the first-person once in a while can get rid of some stilted grammar). Granted, this immersion isn’t open to many, probably not most, historical subjects – but it is one of the advantages of being an environmental or landscape historian!

Perhaps my approach as a transborder historian who combines environmental,

technological, diplomatic, and state-building history allows me to view Niagara’s history in a unique way, double entendre intended. What other familiar topics, or landscapes, do we just need to view with fresh eyes, with new approaches?

One thought on “Seeing Niagara Falls”