Are Canadians fair or is that just a story we tell ourselves? Can we reason our way to lessened inequality or does history teach that violent cataclysms are the only levelling power, as Thomas Piketty and Walter Scheidel argue? How do we maintain a sense and an approximation of fairness in our globalizing and polarizing world? Certainly, there can be no fairness without tax fairness: tax policy is where we negotiate the relationship between wealth and poverty. But how do public ideas of fairness converge or collide with the cacophony of advice emanating from economists, lawyers, journalists, elders, activists, and humanists? These are not technical questions but political and historical 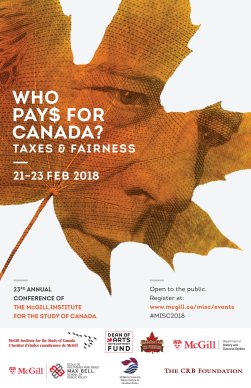 ones, and amidst a “new gilded era” they have a new urgency. At the McGill Institute for the Study of Canada, an interdisciplinary conference from February 21-23 will ask how Canadians formulate core principles of fairness, and how far we actually live up to those norms. 2018 marks a century since Joseph Schumpeter remarked of fiscal policy that one “here discerns the thunder of world history more clearly than anywhere else.” It also marks the centenary of income tax collection in Canada. With the support of the Wilson Institute for Canadian History, we remind historians and non-historians alike that history has a special place in debates about fairness and inequality.

History used to be queen of historical explanations. Not any more: all sorts of competitors in other departments that have squeezed it out. Some of those competitors are old (medical etiologies that dovetail with degeneration narratives for example). Political science used to be political history (“that noble science of politics,” was historian T.B. Macaulay’s phrase), but owes remarkably little to history these days. But even political scientists lament their eclipse by economists and it is above all economists who have, as (sociologist) Marion Fourcade observes “supplanted lawyers in government and historians in the public sphere.”[1]

Different methods, different emphases, different conclusions, no doubt. But to what extent are their diverse explanations for who we are, where we come from, where we are going, actually compatible or incompatible? In regards to Canada, it’s surprisingly hard to tell because there has been so little engagement between them. I’d like to urge Canadian historians to do a little more of that kind of work. I’d like to argue that we bring unparalleled strengths to the job. And I’d like to suggest that taxes are a great place to begin the debate.

It’s intimidating to take on economists because economics has become an extraordinarily specialized and complex discipline. It’s become like medicine in that respect, with a great deal of mathematization that makes it particularly difficult and foolhardy for non-specialists to try to hold economists feet to the fire. Take the elementary and important question of who pays taxes: to believe that legal incidence and actual incidence coincides—that a P.K. Subban actually pays his taxes—is to economists as preferring “The Blue Danube” to “The Well-Tempered Clavier” is to sociologists.[2] It is a sign of low scholarly and social capital. And when you compound the academic niceties with the legal ones, small wonder that only a few hardy historians dig deeply into such important questions as the scale and scope of tax aversion and evasion and prospects for tax reform.

But the most important battles aren’t about technical details at all. I was surprised to learn from a paper given in 2014 by David Quentin, a member of the Tax Justice Network, that most tax laws don’t actually get anywhere near applied. Governments pass laws to define what taxes they can legally exact. But when corporations skirt around the strict letter of the law, the general pattern, Quentin declared, was not to take such cases to the courts. Simply put, countries weren’t putting their tax laws to the test. Why? Because to demonstrate an intention to find the hard edge of tax limits would discourage capital investment. Better to signal that you looked benevolently and none too closely at that fuzzy edge between tax avoidance and tax evasion; that you tended towards an avoidance rather than an evasion interpretation.[3] It’s a question of political will.

The best place to understand tax history is in that space of political will—and that’s a question of public opinion, or perhaps we ought to say public opinions. To whom are statesmen deferring and how and why, in their tax policies and practices? When I look back at classic Canadian debates of a century ago, I see emerging tensions between public opinion and business opinion.

I see it in my early research on exhibitions, from the observation by Sir Francis Hincks in 1850 that, in a country like Canada, where politics ran high and government was distrusted, government action must follow the public; and in the 1893 observation by S.C, Stevenson, manager of Montreal’s annual exhibition, that, with the coming of the National Policy in 1879, manufacturers stopped showing their wares. “Before the N.P. came in industries exhibited; but now, thanks to the tariff, they are all controlled by powerful trusts or combines, who look upon exhibitions with contempt. People must buy from them anyway, so they have no need to show their goods.”[4]

I see it in the appeals by Prime Minister John A. Macdonald for protections of property, appeals that he took to and lost at the Judicial Committee of the Privy Council. Paul Romney calls him a “loser” but that’s a constitutional law point of view. Romney is writing the history of Ontario public opinion.[5] But if we understand this as an episode in the history of Ontario business opinion, we get a different story. If we understand Macdonald as courting business opinion, conveying a message that he was least likely to challenge them in the courts, effectively their best protector, then he may look more like a “winner.”

Macdonald ably appealed to both popular and business opinion, speaking in two registers at once. His successors would find it increasingly difficult to do the same because the structure of opinion itself changed. Public and business opinion, overlapping Venn diagrams for Macdonald, became increasingly distinct. The notion of economic value and the whole sphere, therefore, of financial opinion, became increasingly invested in the notion that it was not accountable to the democratizing public. Where it was demonstrably accountable, it demonstrably shed value; where it was unaccountable, values could soar.

That perspective helps us to understand Tory political victories in 1911 and 1917. Key electoral issues were the possibility of municipal, provincial, federal confiscation of wealth, whether by taxation or other means. All the progressive confiscation projects have to be understood as in dialogue with one another and with American events. The 1911 debate was about a particular trade deal with the United States, but it was also about who was also about who was the most convincing champion of and shield for corporate capital. That was even truer in 1917.

These are not obscure events; they are some of the most important and well-studied episodes of Canadian history. But we don’t understand them well unless we incorporate into the analysis the specialized kinds of opinion that were in tension with the very category of public opinion. Modern forms of wealth exist largely in opinion. When opinion changes, wealth changes. In 1790s Montreal, as a consequence of Black resistance, slavery came to seem so unfair and so unenforceable that, almost overnight, the value of slaves as property evaporated.[6] The same thing might happen to unceded lands; it might even happen, one day, to hedge funds and tax havens. Historians are better than economists at describing and determining how fairness norms take shape. Fairness norms and political will are not technical economic constructs: economist Thomas Piketty notes that “The problem is now to explain where these social norms come from and how they evolve, which is obviously a question for sociology, psychology, cultural and political history, and the study of beliefs and perceptions at least as much for economics per se.”[7]

Taxation is not the only place to study that interplay of wealth and norms, but it’s a very good one. Suresh Naidu observes that the logic of Piketty’s work is “clearly Foucauldian: taxes produce the public subject of wealth and make it knowable, legible, and governable.”[8] Here are two economists who read history, and their numbers are growing. This is a welcome development; let’s welcome it.

Elsbeth Heaman teaches history at McGill University and is current serving as interim director of the McGill Institute for the Study of Canada.

For the next two weeks, Beyond Borders will publish a series of articles related to and in anticipation of “Who Pays for Canada? Taxes and Fairness,” a conference on taxes and fairness organized by Dr. Elsbeth Heaman that will take place at the McGill Institute for the Study of Canada from February 21-23. Today, we start with an introductory post by Elsbeth Heaman. Next week, we will follow up with an article by Shirley Tillotson, followed by Laura Madokoro in two weeks.

2 thoughts on “Fairness between Economics and History in Canada”